What is a Serigraph?

Silkcreen Printing, also goes by the term: Serigraph. The Word Serigraph is a combination of two Greek words, seicos, meaning silk, and graphos, meaning writing. Silkscreen Printing and other stencil-based printing methods are the oldest forms of printmaking.

Silkscreen Printing can be traced as far back as 9000 BC, when stencils were used to decorate Egyptian tombs and Greek mosaics. From 221-618 AD stencils were used in China for production of images of Buddha. Japanese artists turned screen printing into a complex art by developing an intricate process wherein a piece of silk was stretched across a frame to serve as the carrier of hand cut stencils.

In the United States, screen printing took on the status of art in the 1930s when a group of artists working with the Federal Art Project experimented with the technique and subsequently formed the National Serigraphic Society. American artists began making "fine art" screen- prints and devised the term "Serigraph" to distinguish fine art from commercial screen printing. During the 1960s, Serigraphy was popular with POP artists, who were attracted to its bold areas of flat color.

How is it done?

The basic printing process is the forcing of ink through a stencil onto paper with a squeegee. This is called "pulling" Each color must be printed in the same place and in the same order for each print to resemble the original.

An original image is the first step in the process. Then the screen printer uses his knowledge of and preferences for color to develop a separate stencil for each color.  Each stencil is then adhered to its own screen.

Inks are custom mixed by the artist and matched to colors of the original and desired outcome of hue and value. In my prints, the number of colors on a silkscreen print varies: usually there are at least six different colors, but there may be up to 40 colors on a single image.

The screen printer pulls ink across the printing frame, which has been placed above a sheet of paper that will hold the art work. The ink is then forced through the screen and onto the paper below. This process is repeated on all sheets of the edition, and then the stencil is destroyed. 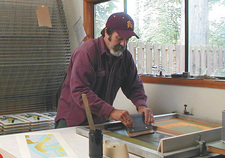 The printing process is very labor intensive; from the creation of designs, to transfer to the screen, mixing of colors, and printing of an edition. Typically a silkscreen printer allows 10% more of what he wants for an edition size to account for images rejected due to errors in printing. In my printing, large prints can take 3-4 months to complete while a small print can be finished in as little as one month.


A silkscreen printer usually makes a limited edition of his designs. An edition of a fine art print includes all images published at the same time. Editions of silkscreens range from 1 to 500 prints. Edition size can be determined by the printing process itself, as when a stencil wears out, but usually the edition is limited by the artist. Since the stencils are destroyed after printing, each edition is unique.

Prints are signed and numbered in the bottom margin of the print with what looks like a fraction. The upper number represents the impression within the series and the lower number indicates the edition size. A print marked 2/25 is the second of twenty-five images. The number indicates the order in which prints were signed, not necessarily the order in which the impressions were pulled. This, plus the fact that later impressions are sometimes superior to earlier pulls, means that lower numbers do not generally indicate better quality impressions.

What is the difference between an original fine art print and a reproduction?

A fine art print is a "multiple original" made by hand, one impression at a time, from a plate (usually wood, copper, zinc or in this case  amberlith film) etched or carved by the artist. With original fine art prints, the tactile quality of the ink on paper and the printing style, are inseparable parts of the artwork; something you cannot achieve with reproductions.

A ﻿reproduction﻿ is a copy of an already existing work. It is just a photo-mechanically reproduced image, often scanned and then mechanically printed en-masse. There is no intervention of the artist. Reproductions are in essence posters, often called iris or giclee prints, and have little or no monetary value. The inks used fade when exposed to the sun and the paper is not always 100% cotton and acid free, which means that it will easily degrade and yellow.
Despite good quality printers and up-to-date technology used to produce giclees or iris prints, the result cannot compare to fine art prints.
Additionally, reproductions are printed by the thousands, and there is no physical limit to the number of impressions, as the matrix does not wear down. However, just to support a price desired by the publisher, edition size is artificially limited in order to create scarcity and therefore increase the value of the print, which is even made to sign and number by the artist thus creating confusion as to authenticity.

​See Photos of the Process

See a video of the process